If you’ve been hanging around the Plan to Eat blog for a while, you’ve likely read at least one of my posts on using food to control my chronic illness. I have Ulcerative Colitis, which is considered an autoimmune disorder, and over the years I have found a certain amount of relief from my flares if I can adhere to specific diet restrictions. I started with GAPS, which led to something quasi-Paleo which led to the Autoimmune Protocol (AIP). The AIP promotes a strict Paleo diet that also eliminates nuts, seeds, eggs, nightshades, and a few other items. It also includes lifestyle modifications such as regular, adequate sleep and gentle exercise. 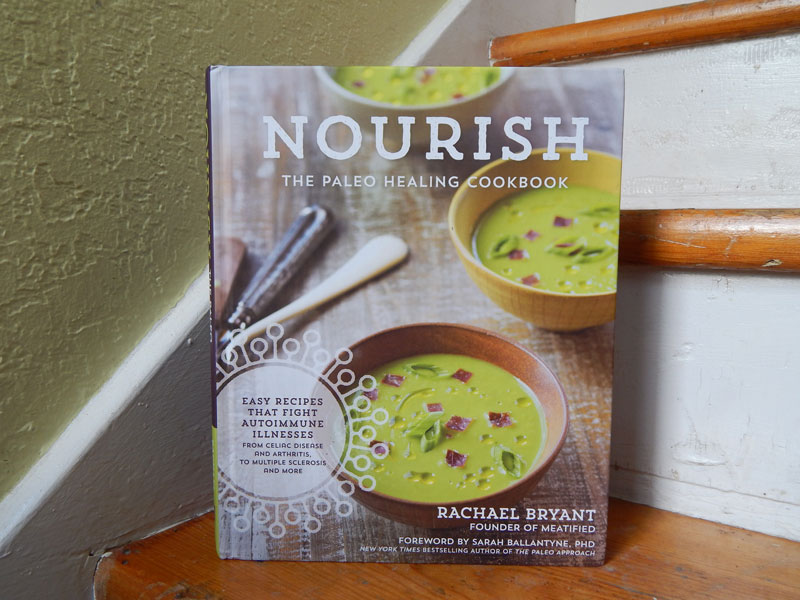 For the past year or so, during pregnancy and post-partem, I haven’t been able to keep up with the AIP. Newborns don’t allow for quality sleep, the “free” time I managed to grasp was spent sleeping, not exercising, and I was less strict about my food choices, allowing eggs and nuts back into my diet in order to simply get enough calories to feed both me and a growing baby. The results? Weekly flares and more time spent mothering from the couch.

Baby will be turning one soon, which means that my sleep is regulating (hallelujah!) and I’m starting to think about some regular walking and yoga. It also means I’m looking ahead to what my diet should look like after he stops using me for a food source. I’ve decided that the Autoimmune Protocol needs to be a part of it, and I was so delighted to find Rachael Bryant’s book, Nourish, The Paleo Healing Cookbook* to help inspire me to get back on track. 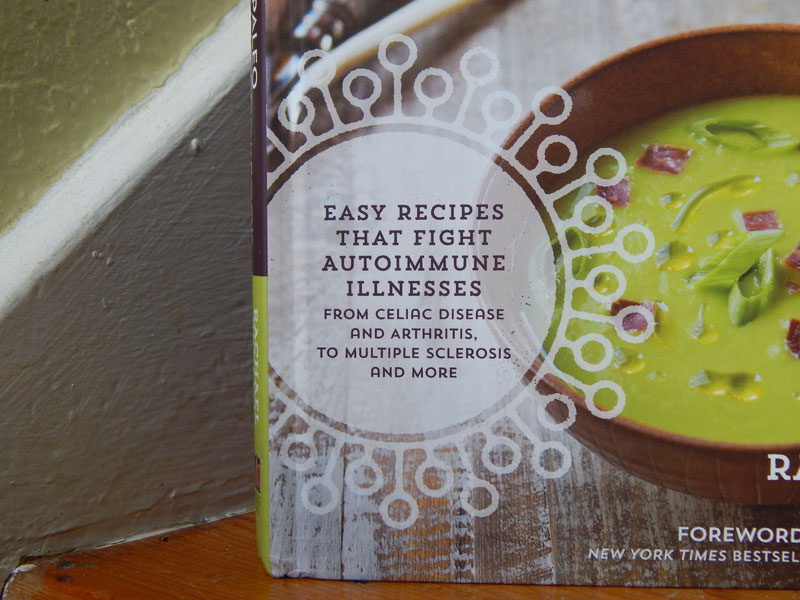 One of the most difficult aspects of the AIP is that it takes an already restricted diet (Paleo) and makes it even narrower. It becomes difficult to find food that you can share with people without apologizing. Rachael struggles with her own autoimmune disorders and she understands this, so her recipes are full of flavor and delightfully normal. So normal that I’ve shared them occasionally with my kiddos when they thought the food on my plate looked better than the food on their plates. 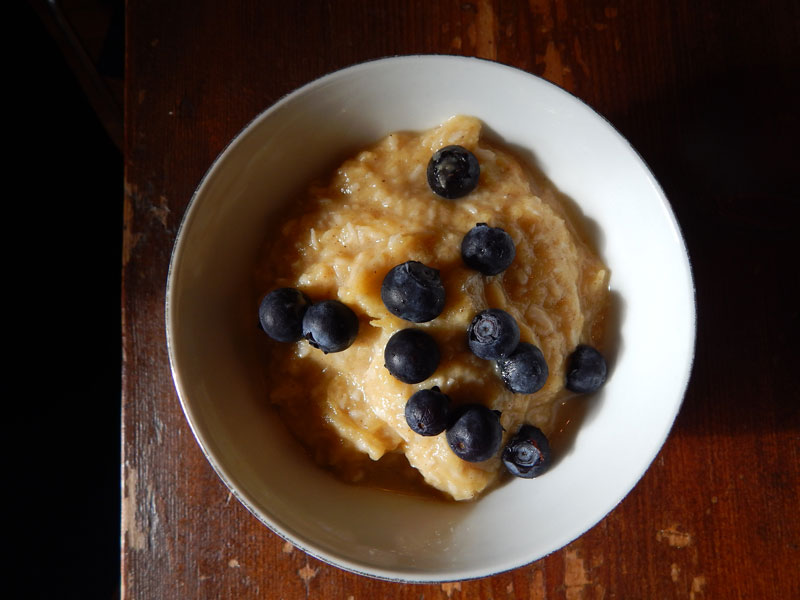 With a very limited number of ingredients, Rachael created over 120 recipes that somehow manage to not be redundant. And she even fills in some much-missed ethnic holes. How do you do Mexican without tomatoes and peppers? Try the Chicken Street Tacos with Blueberry Salsa and Avocado Cream. Indian without chiles? Try the Chicken Curry with Creamy Spiced Pumpkin. Thai without nightshades? You have to try the Thai Green “Curry” Paste as a chicken marinade.

There are also some foods included in the AIP that can just be straight up baffling for a middle-class American girl to cook with. Chicken livers? Sardines? Don’t worry. Rachael has recipes for making those bits more approachable. Hint: everything tastes better with bacon. Especially a chicken heart.

As for the sardines, her Sneaky Tuna Salad (“sneaky” because it includes a can of sardines) with Green Onion Dressing has been added to my regular rotation of lunch recipes. Canned tuna is an easy and affordable way to incorporate fish into my diet, but I try to limit myself to one can a week because I have some reservations about mercury. Canned sardines are also easy and affordable, but…well…less palatable. Rachael uses a can of each to make a tuna salad that is both high in protein and high in good, healing fats, and I get two meals out of one can of tuna. And it’s awfully tasty.

I’m also delighted by her thoughtful veggie recipes. Because when you’re trying to heal, it’s important to eat as much plant matter as possible. And carrot sticks get a little boring. Radish Salad with Radish Greens Pesto is much more interesting (I’m eager to try this one with the radishes from our garden!) 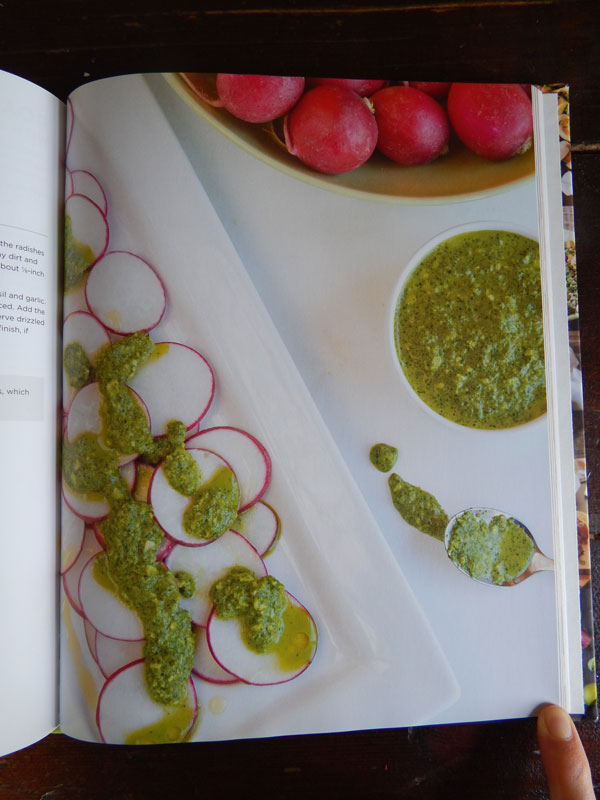 Most cookbooks, even Paleo ones, tend to treat the veggie side dish chapter as an afterthought, giving me recipes that I can easily come up with on my own. But Rachael pushes the veggie envelope farther and turns a vegetable dish into something worthy of a main dish. I can make Herbed Spaghetti Squash with Bacon and “Bread Crumbs” or Collard Greens with Parsnip “Cream”, put some leftover roasted chicken on top and have a very tasty, veg-centric dinner sans carrot sticks.

And, AIP veterans take heart, Rachael has some dessert recipes too. Popsicles, puddings, and ice creams will help you find delight in something other than a handful of grapes.

With Nourish in my kitchen I am almost looking forward to my return to a strict AIP diet. Rachael has provided me with a wide variety of delicious options to keep my taste buds happy. 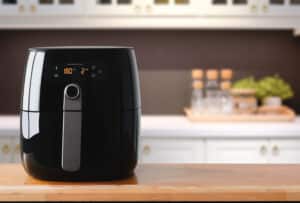 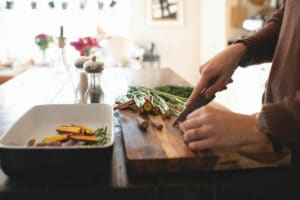