A few weeks ago I made pasta out of zucchini. It was the first time that I had ever attempted this, so I just made it up as I went along. I used a vegetable peeler and stripped off the meat of the zucchini into thin strands and boiled them a bit to make them softer, treating it exactly like I would a fettuccine. Though this method had a few frustrations the recipe turned out great. The zucchini served as a perfect carrier for the sauce, but I felt like there had to be a better way to create a more pasta-like version of what I had made.

As I did more research I discovered that many people are using sliced vegetables to replace their pastas. As I was exploring different techniques of how to slice the vegetables I saw the Safe Skins Spiral Vegetable Slicer sitting on a co-worker’s desk. It seemed like a better solution to what I had been doing with the vegetable peeler and I was pretty eager to try it out. I didn’t even have to go looking for it – the perfect item had come to me! 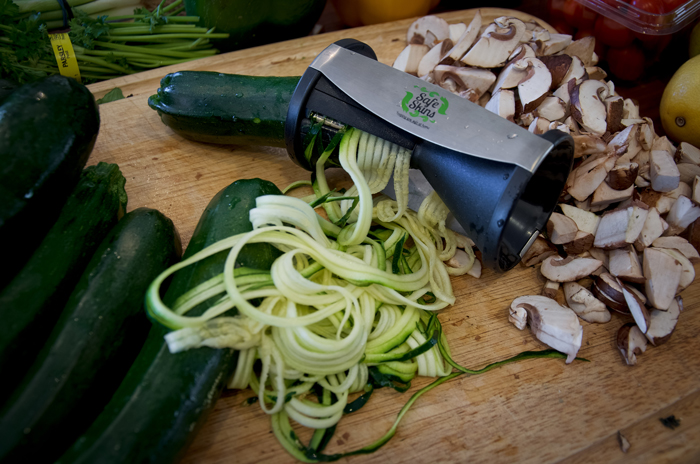 I revisited the zucchini as my alternative to pasta for a chicken dish with basil lemon sauce. Using the Safe Skins slicer, I turned seven zucchini into a huge bowl of pasta. Though it took some time, the spirals of zucchini were beautiful and very much like the pasta I was originally seeking. I wouldn’t recommend this for serving a large group of people due to the amount of time required with sending the vegetables through the slicer, but it was a great solution for making a dish for six people.

The Safe Skins Slicer has two triangular ends: one with a thinner grate, and the other with a thicker grate. The thicker end worked really well for the zucchini. It creates a noodle-shape that is very similar in thickness to pasta, which I found could be substituted quite easily. If a recipe calls for 1 cup of pasta, use 1 cup of sliced zucchini (or whatever vegetable) instead. What a great way to get more veggies into a meal! 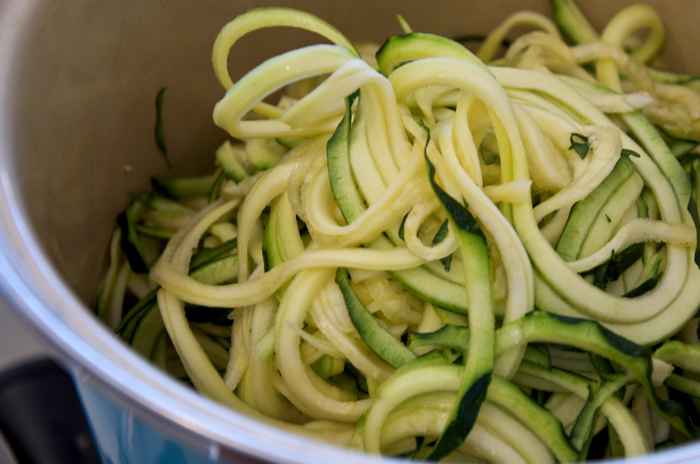 I had only two criticisms of the slicer:

The first is that the teeth of the slicer are difficult to get completely clean, even when using the provided brush. I used a stiffer brush that got the blades acceptably clean, though not perfect. The slicer is dishwasher safe and the overall cleaning is pretty easy, but the blades can be tricky.

The second is that occasionally, while twisting the veggies through the slicer, the seedy center would clog up the middle of the device. Because nothing could move, the slicer would get hung up and no longer slice the vegetable. A simple fork or knife will poke this part through and you can keep on working. Overall, these issues were minor and didn’t dampen my excitement for the slicer.

The Safe Skins Spiral Vegetable Slicer comes with the slicer, gripping cap, cleaning brush, and a small storage bag to help keep fingers safe, and can be purchased on Amazon for about $15. That’s awesome. I happened upon a similar product in a local kitchen appliance store that was selling for $29.99, so the price is great, but Plan to Eat has an opportunity for you to get your own Safe Skins at a special price:

Safe Skins is giving away one spiral slicer, as well as a few other little goodies (a nut milk bag!), to a lucky winner. Entering is easy:

Now, let’s get in the kitchen and eat our veggies.