(Reduced) Sesame and (No) Soy Meatballs

I tried to eat soy sauce for a long time, telling myself that it didn’t really count as soy because it was fermented soy. Fermentation is a process of food preservation, and a handy little by-product of this process is all sorts of good little bacteria that help to digest your food. So my reasoning was that all of these friendly bacteria would compensate for my body’s own inability to digest the soy. Really I just wanted something to dip my sushi in.

I even switched to tamari, the gluten-free soy sauce, thinking surely it was the gluten that was bothering me. But when that didn’t work either I was forced to admit the truth. My sushi would be dip-less.

So I was thrilled  ecstatic so delighted that I nearly fell off my chair when I saw this recipe a few weeks ago on Cybele Pascal’s blog for Cybele’s Soy-Free Soy Sauce. I headed to our local natural food store to purchase the needed seaweed. I had it in my hand when my eye was caught by a little bottle on the shelf right below. A soy sauce…made from coconut sap. Would you ever have guessed?? I decided this called for a more scientific analysis of my soy-less soy sauce options.

This option has a lot in its favor. It has a nice saltiness and when mixed into recipes makes for a passable substitute for soy sauce. Plus, it is already in the bottle. And as a busy mom with four little babes that has great value to me.

However, I find it to lack the depth and earthiness of traditional soy sauce, that certain “umami” that only a bit of gluten can give you. And it’s a little too sweet.

There is some debate about whether or not coconut falls into the “tree-nut” category, thereby qualifying it as a list-topping allergen. If you’re avoiding coconut, obviously this option isn’t for you.

My batch of Cybele’s sauce came together in a jiffy. I ended up buying my seaweed at the local Asian grocery store (for half of the cost at the spendy natural food store–just FYI). I’m so very pleased with the results. Cybele’s sauce definitely has more depth of flavor and complexity, which I like.

I like my soy sauce nice and salty, so I added a generous bit of salt to my batch and a dash of fish sauce (since fish is one allergen that’s actually ON my menu).

So I think I came out with two winners here. I prefer Cybele’s recipe for its complexity and flavor, but like having something already in a bottle for those times when I don’t have time to cook one more thing. Both of these will be a part of my pantry from now on, and will go with me to the sushi bar.

It was with great pleasure that I put the soy-less sauces to good use and cooked up this recipe for the whole family. It got a thumbs up from everyone at the table, except the Pickle who is three years old and just likes to be contrary. If anyone has any tricks for creating a perfectly round and browned meatball, I’m all ears. Mine always get a little flat on one side and come out looking like a partially deflated kick-ball.

I’m presenting this recipe as printed, with my allergen-friendly adaptations in parenthesis.

* This recipe is being shared over on Cybele Pascal’s allergen-free blog. Click on over to find lots of other allergen-friendly recipes. 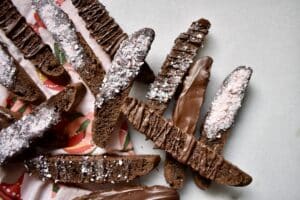 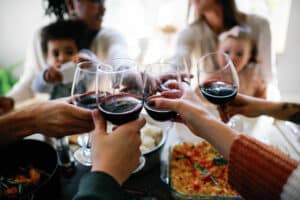 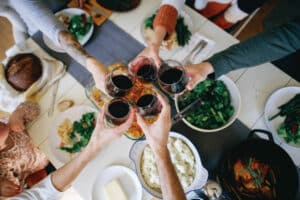